In my career which has spanned almost a quarter of a century (ouch!), it would be true to say that my practice and philosophy have been far more influenced by people than by organisations. Ofsted make the grandiose claim that they are “raising standards improving lives” (pictured), 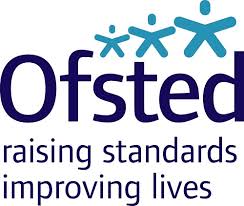 but truthfully it can only be through the relational aspects of human leadership rather than institutional benchmarking that lives can be improved.

I’m sure that, given the fact that you’re reading this blog, you’re interested in reading about the stories of other leaders and considering what you read in the context of your own role and setting. You want to do well because you care about those you’re with on a daily basis.

Sir Ken Robinson in his book, Finding Your Element, (2013) considers the vocational dimension of our lives through the analogy of a voyage. He states that whilst charting your course, “you meet new people and have new experiences; you influence them and they affect you and together you change the stories of one another’s lives.” I was stopped in my tracks on reading these words. I’d never really thought about professional relationships impacting on the “story of my life”. And yet, what a potentially wonderful image this creates as it emphatically underlines the importance that, as leaders, we must be in the right place, at the right time, for the right reasons. As Vic Goddard in his book, The Best Job in the World (2014) says – it is the Head Teacher who “sets the weather”, so we need to feel positive about our role.

Jocelyn Davis in The Greats on Leadership, (2016) affirms, “Leaders show courage when they face down their adversaries, but they show more courage when they face up to their responsibilities.” She also bluntly explains that, “Good leaders step forward when others stay back. They speak when others stay silent. They forge ahead where no path has been forged, and they set an example for others to follow. You won’t always see them out in front…but wherever they choose to stand…it won’t be against a wall, butt covered, observing which way the wind blows.”

I can imagine that on occasions, the communication between government, Ofsted and the Standards and Testing Agency is somewhat similar to the cartoon pictured. So, how as leaders can we face up to our responsibilities on our own terms rather than the changing requirements of others? In short, the answer lies within our own expectations. 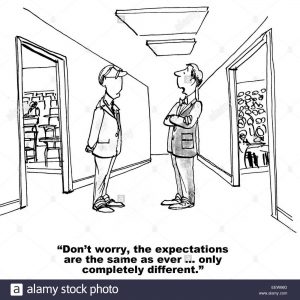 I recently listened to Dr Ioan Rees, CEO of Sycol, an organisation focused on developing high performance cultures. He explained through the examples of hotel and restaurant chains, how the standard we are prepared to accept is largely down to the standards expected by the organisation itself. For example, we wouldn’t ask to move rooms due to a little mildew being present in a low budget, basic hostel but we would if we were staying in a hotel which made bolder claims about the quality of its hospitality. We were then shown two pictures similar to the ones pictured below and asked, “Which restaurant has met its standard?” 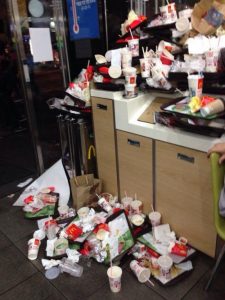 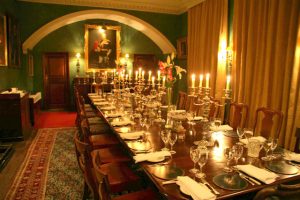 The answer of course is that both of them have. Most of us have walked into a fast food shop after a night out at the weekend and ignored all the litter which is lying around – because the management accept it and we’ve come to expect it. However, if we arrived at a top restaurant to be met with a similar picture, we’d walk out!

So – how much does the school you’re a leader in reflect your expectations? What is your school’s standard on your own terms? You’d never have either of the conversations below, so if you wish to recruit well, it has to be visible from the outset what the expected standard is at the school you lead for all types of things from staff and pupil behaviour to displays and learning environment. 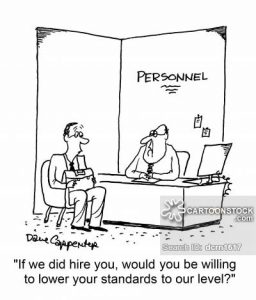 Mary Myatt in her book, Hopeful Schools (2016) refers to Dame Alison Peacock’s “ethic of everybody”. She explains that, “the fact that everyone has a voice does not mean that anything and everything goes… Ethic refers to the way we do things here…it also has a layer of moral overtone to it…doing the right things, for the right reasons, for everyone.” The leadership task then involves the process of your individual standard becoming the school’s standard – understood, accepted and owned by everybody.

Andy Buck (Leadership Matters 2016) when writing about delivery explains the importance of, “Making sure things happen when you want them to and to the standard you expect.” He also talks about the need for the leader to have, “the unshakeable conviction and determination to do what it takes to do the right thing for the school and the young people it serves.” This however cannot be achieved and sustained purely by communicating your expectations clearly. Relationships have to positive so that others are prepared to engage meaningfully with you as leader.

In my blog post, “Welcome to Headteacherville!”, aimed at new head teachers which can be viewed here, I also write about the importance of establishing relationships first. There can be no short cut to this element. Andy Buck writes that, “The single most influential factor in determining discretionary effort in an individual member of staff is their relationship with and respect for their direct line manager.” So whilst “the right people are self-motivating and self-disciplined” as he puts it, facing up to our responsibilities involves our human spirit  establishing relationships and creating a culture with others so that it exists even when you’re not there. This obligation should be considered positively.

Tom Rath (2009) explains that leaders need to talk about how they have faith in people. Mary Myatt explains how “our expectations both for ourselves and for others are a consequence of paying attention as much to the positive as the negative.” Meanwhile, Jocelyn Davis (2016) describes four levels (can we still use that word?!) of leadership development. They are: initiator, encourager, cultivator, mainspring.

Initiators go first; encouragers create hope; cultivators focus on people; mainsprings create institutions or cultures that last long after they’re gone…they create other leaders…they give themselves up. Which one of these describes you best?

Davis writes of the behaviours that distinguish true leaders from “mis-leaders” and cites what she calls the eight most dangerous traps of leadership.

Reflecting on these traps, the vast majority of them lie in failed relationships, either by not treating others as they need to be treated or by not allowing others to influence and enlighten us as the leader. Whilst accepting our human frailties, generally all of these can be avoided if our relationships are right. Davis urges leaders to “Challenge them (the team) to live up to the ideal”, citing courage, integrity, resilience, generosity and concern as the important characteristics of effective leaders.

So, in facing up to our leadership responsibilities, irrespective of transient outside pressures, we must offer ourselves up in the service of others, based on our own standards of the highest quality. When this happens, “you meet new people and have new experiences; you influence them and they affect you and together you change the stories of one another’s lives.” That’s when pressure becomes privilege – and we as leaders should be thankful.